Do you want to order gold jewelry? Prices shown are approximative!

Contact us to receive an actual price before placing an order.

The runes from the Armanen Futharkh (that was introduced by Austrian mysticist Guido von List) were used for the ring. 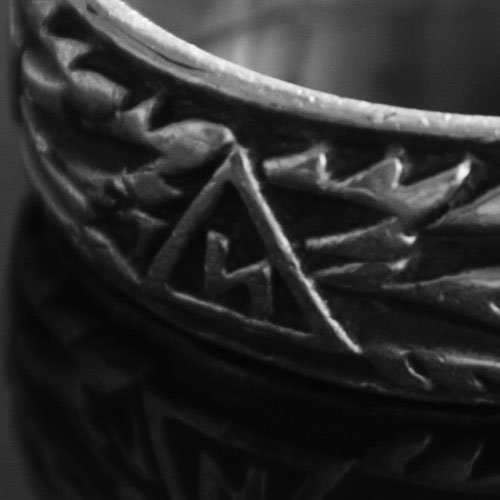 Two Siegrunen (Sig-Runes) one left and one right of the skull each framed by a triangle represents the male power of the fire and of the conquering sun.
This symbol was used by many Aryan tribes: Celts, Thracians, Germans, Scythians, and Vedic Aryans. It was called "teeth of the Gods" or "the arrows of the Gods". The ᛋᛋ runes also stand for the initials of the SS "Schutzstaffel", and could be read as a  rallying cry of  "Sieg! Sieg!" or "Victory! Victory!"

A Hagal rune in a hexagon frame which represents the unshakable faith and comradeship (Kameradschaft) that was ideal for the leaders of NSDAP and Schutzstaffel. It is similar to the Haglaz rune of the Younger Futhark, which stood for "hail". In Kimmerian runes (Old Bulgarian) rune/letter "Ж" (живот - jivot) means the whole life cycle from ᛉ birth to ᛦ death. For the Vedic Aryans this was the symbol for the Cosmic Turtle or the World-bearing Turtle. Also the Divine Turtle, according to Guido von List this is the mother rune that: "Enveloped the universe in you and gave you control of the universe." 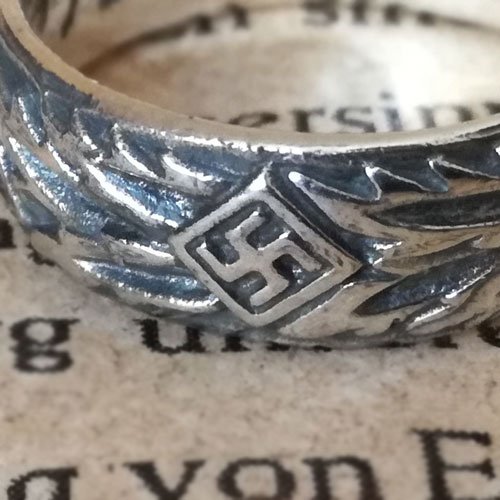 A swastika standing on the apex in a quadrat frame. The swastika is an ancient symbol that was in use in many different cultures for many years ago. The oldest swastikas are found in Mezine, Ukraine dated 12,000 years old, clockwise and counter-clockwise in the Devetashka cave, Bulgaria, dated 8000 аnd 7000 years old near Altimir, Bulgaria.
There are two versions of swastikas: clockwise (卍) and counterclockwise (卐) also called left-hand (卍) and right-hand (卐).
One of the most common symbols with various meanings: sun cross, representation of the Big Dipper circling the North Star, the four seasons, the four elements and the swastika itself the fifth, the cycle of time, four birds' heads (Tierwirbel), su-astika for the Vedic Aryans means "lucky charm", Shweta in Sanskrit feminine given name, which means "fair", "fair one", "lovely" and "white". The other possible meaning of the name "swastika" could be derived from Germanic languages- swartijana- Schwarz- sverta which means "black" or "to blacken". 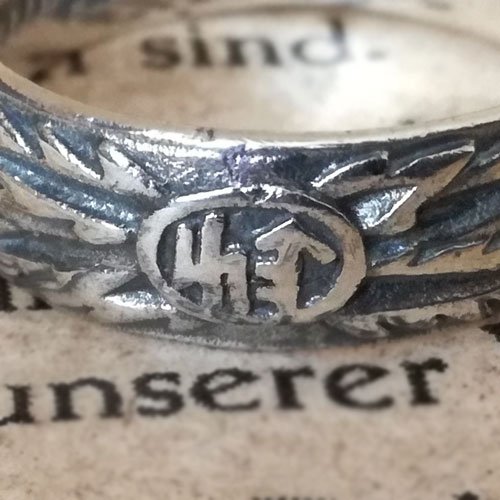 Heilszeichen or the double runes on the rear of the ring are in a circle frame. They symbolize the good fortune, success, salvation. The symbols were created especially for the SS - gibor rune plus a bind rune. The shape of the gibor rune is similar to that of the Wolfsangel symbol. The bind rune spells Got or God in Old High German. This was the design of Karl Maria Wiligut.

The oak was an ancient symbol of special status among many Aryan tribes (Celts, Thracians, Germans, Romans). Oak was honored because of its massive growth and noble presence. The name "druid" came from "duir", the Celtic term for the oak.
Symbolic Meaning of the Oak Tree: Life, Strength, Wisdom, Nobility, Loyalty, Longevity, Heritage, Honor. Donar's oak was a sacred tree of the Germanic pagans in Hessia. The sacred trees and groves were a mythic prototype of a world tree, described in German mythology as Yggdrasil.

WHAT IS ENGRAVED ON THE INTERIOR OF THE TOTENKOPF RING? 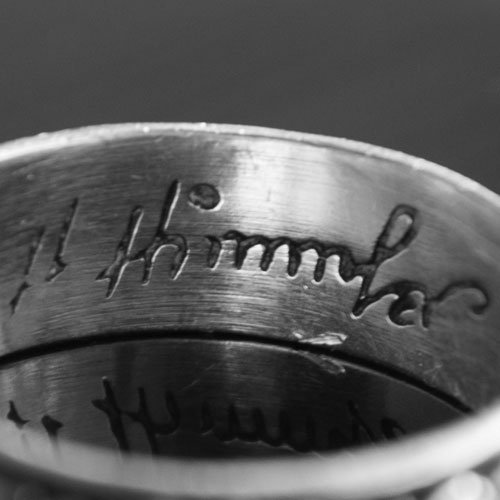 On the inside of the ring was S.lb (for “seinen Lieben”, or “With Respect and Honor”) followed by the recipient's last name, date of presentation and Himmler's signature. Recipients also received a specially designed box decorated with the SS runes for storage or carrying. Each ring was accompanied by a letter. The letter was written and signed by Heinrich Himmler.

At NSVendor you can find unique sets that include Heinrich Himmler's letter and Totenkopf ring. In the sets, you can also find other World War II awards, framed portraits of WWII celebrities, specially designed box decorated with the SS runes for storage or carrying, books, and more.

Gahr & Co. of Munich were the producers of the SS Ehrenring. They produced nearly 15 000. On 17 October 1944 production of the rings was canceled due to economic reasons. In 1938 Himmler ordered the return of all rings of dead SS-men and officers to be stored in Wewelsburg Castle. This was to symbolize the eternal membership of the deceased in the SS order.